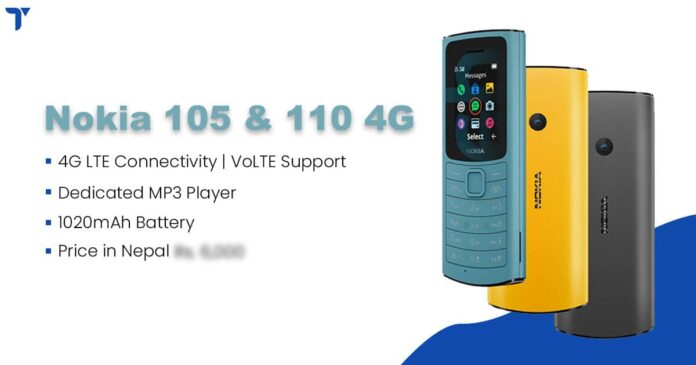 Nokia is one of the top users’ choices when it comes to feature phones. Nokia 105 and Nokia 110 previously launched in 2019, were two of the most popular feature phones. The company has re-introduced the two phones with 4G LTE connectivity. This article will find about the features and specs updates of both devices along with their price and availability.

According to HMD, there are no big changes to either of the new Nokia 105 and Nokia 110. The 4G connectivity is the only major update. Both 4G models support Voice over LTE service which allows you to have crystal clear voice calls over the 4G network. There are several other useful features such as dual SIM, expandable storage and music playback available making them the most favorite feature phones.

The two devices share many similarities in design and build aspects but provide different color options. A noticeable difference is a VGA camera set on the back of the Nokia 110 4G. An LED flash on the top can be used as a torchlight. Both have a 121.00 x 50.00 x 14.50mm body dimension while the Nokia 105 4G weighs 80.2 grams and the Nokia 110 4G weighs 84.5 grams.

In terms of display, both phones feature a 1.8-inch TFT non-touchscreen display with a 120 x 160-pixel resolution. There are two different color sets that include Black, Blue & Red for Nokia 105 4G and Aqua, Black & Yellow for Nokia 110 4G.

Nokia 105 4G and Nokia 110 4G rely on Unisoc T700 processor based on Series 30+ Operating System. The system software has a general feature phone UI with large icons for easy and quick access. There is also an assist feature that readouts the menu items, which can be helpful for people with visibility issues. It has a dual SIM slot that accepts two GSM Nano-SIM cards on both devices.

Both come with 128MB RAM and 48MB in-built memory. However, Nokia 110 4G has internal storage expansion up to 32GB via a microSD card. There is a dedicated MP3 player for users who prefer music entertainment. The FM radio doesn’t require earphones plugged in although the phones have a 3.5mm headphone jack.

Nokia 105 4G and Nokia 110 4G have a 1020mAh removable battery that can standby days of usage. The battery can be replaced by opening the back panel. The phones ship with a MicroUSB inside the box.

Nokia brings all ranges of mobile phones suitable for every category of users’ preferences. You can find more about Nokia phones along with their prices in Nepal on our updated article: OFFICIAL: Nokia Mobile Price in Nepal [Updated]