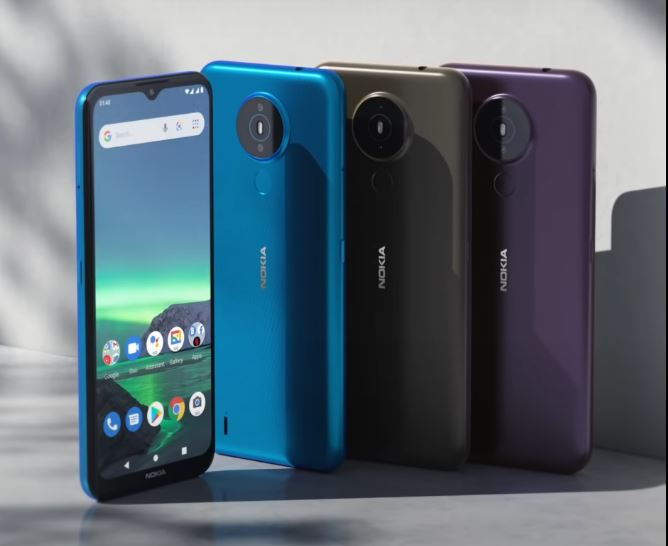 HMD Global, the company that has acquired rights to the brand Nokia, on February 3rd 2021 announced the launch of new Nokia smartphone Nokia 1.4. It is the successor to the Nokia 1.3. The phone is launched as the budget segment smartphone in Nepal. The price of Nokia 1.4 in Nepal is NPR 12,899.

Nokia 1.4 is a budget-friendly phone for everyday use. It has an impressive display with a powerful battery and decent cameras. However, the charging for the battery is just 5W. The brand has ditched the face unlock, offering fingerprint sensor instead. According to the HMD, “Nokia 1.4 is the perfect family-friendly device, designed for families who are spending more time at home together. Millions of families spending more time at home led them to increase the screen size on the Nokia 1.4 to the maximum capacity, so parents, carers and children can stay connected and productive.”

Nokia 1.4 has a 6.58 inches HD+ display with the ratio of 20:9. The display is the largest ever in the Nokia 1 series device. Similarly, it has a resolution of 720 x 1600 pixels. The phone weighs 178 grams. It has three color variants: Fjord, Charcoal, and Dusk. The phone has robust build quality preventing damages after the fall from household surfaces. Well crafted, the phone sits securely in any hand.

The selfie lies in a dewdrop notch at the top while the back camera is on the oreo-style setup. The top has a headphone jack, while the right side has a power button and the volume rocker. Similarly, it has a SIM card tray and Google assistant button on the left.

It has a rear-mounted fingerprint sensor just below the camera, after which there is a branding of Nokia.

Nokia gets its processing power from Qualcomm Snapdragon 215 with quad-core chipset clocking at 1.3 GHz speed. Similarly, Adreno 308 handles the graphics of the smartphone. The RAM and inbuilt storage variants are 1/16GB, 2/32GB, and 3/64GB, available according to the region. The phone also has a microSD card slot, supporting up to 128GB of extended memory.

Nokia runs Android 10 (Go edition), while it is ready for Android 11 (Go edition), making it up to date. It provides three years of security updates package

The rear camera features an 8MP primary camera with autofocus and a 2MP macro camera. The dual camera is coupled with a Camera Go app by Google.

The primary camera has a range of shooting modes while the macro camera helps create detailed pictures. It has a rear flash. Similarly, portrait mode and Night mode are also available

The front has a 5MP selfie snapper in a dewdrop notch.

Both the cameras are capable of capturing 720p at 30fps videos.

Nokia 1.4 packs a 4000 mAh non-removable battery. Though the battery has an upgrade (3000 mAh in Nokia 1.3), it supports only 5W charging. According to the phone advertisement, the battery lasts for two days.

Nokia 1.4 Price in Nepal and Availability

The  price of Nokia 1.4 in Nepal is NPR. 12,899 for 1/16GB variants. The phone fits perfectly in the budget segment. However, the storage capacity may keep the consumer away from the phone, as other devices with the same budget range offer large storage. The authorized distributor of Nokia devices in Nepal is Teletalk Pvt. Ltd.

Since Nokia 2.4 could fit in the list of the best phone in the price segment, Nokia 1.4 may also give a tough competition to the other devices like Realme C11 and Infinix Hot 10 Play.