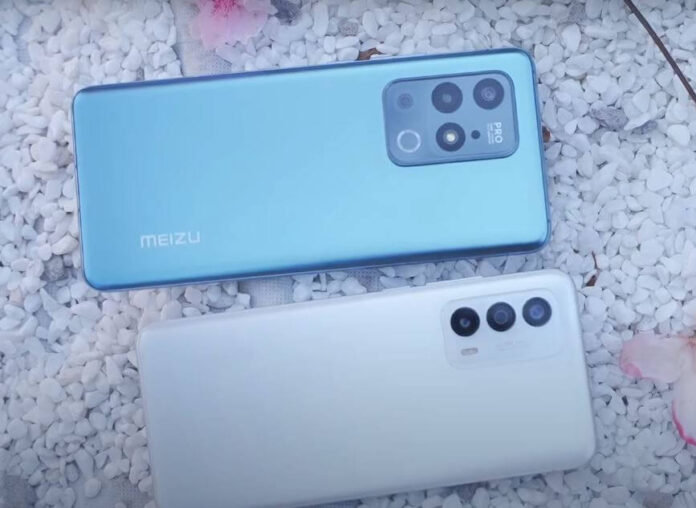 The 18 Series of the Meizu was announced in China as a flagship smartphone on 3rd March 2021. Under the series, the company has two new smartphones: Meizu 18 and Meizu 18 Pro. They are the successor to last year’s Meizu 17 series. With the starting price of 4,399 Yuan, the smartphones are available for purchase from 8th March in China. According to the Chinese price, the smartphone’s expected price is NPR 90,000 for Meizu 18 and NPR 105,000 for Meizu 18 Pro in Nepal.

Both smartphones are similar, with flagship features and only a few changes in the camera and battery. They flaunt a Super-AMOLED display and have a fingerprint sensor that works with wet hands and underwater. Let’s dive into their features, specifications and know the differences.

Meizu Pro is more prominent and bolder; it has a 6.7-inches S- AMOLED E4 display with QHD+ resolution and curved edges. The display offers the same refresh rate of 120Hz, a 240Hz touch sampling rate, 526ppi pixel density, and the same peak brightness. Similarly, the device measures 162.5 x 73 x 8.1mm dimensions and weighs 189 grams. It also has an IP68 rating for water and dust resistance.

An ultrasonic in-display fingerprint sensor is available for unlocking the phone. The scanner works even with wet hands and underwater.

Both smartphones are powered by the Snapdragon 888 processor coupled with up to 12 GB of RAM (LPDDR5) and up to 256GB of UFS 3.1 storage.

The front camera on the Meizu Pro is a 44 MP Samsung GH1 sensor. Simultaneously, the rear has a quad-camera comprising a 50 MP Samsung GN1 primary camera with f/1.9 lens, 32 MP Sony ultra-wide-angle lens with 130-degree field of view, 8 MP telephoto lens, and a 0.3 MP 3D ToF camera. It can capture the video up to 4K resolution.

Meizu 18 packs a 4,000 mAh battery, while the Meizu 18 Pro has a bigger battery of 4,500 mAh; it supports wireless or wired fast charging of 40W and 10W reverses wireless charging.  The former model supports 36W fast charging.

Meizu 18 and Meizu 18 Pro Price in Nepal and Availability

The smartphones are competitive with the recent launch from Samsung – Samsung Galaxy S21 Series.