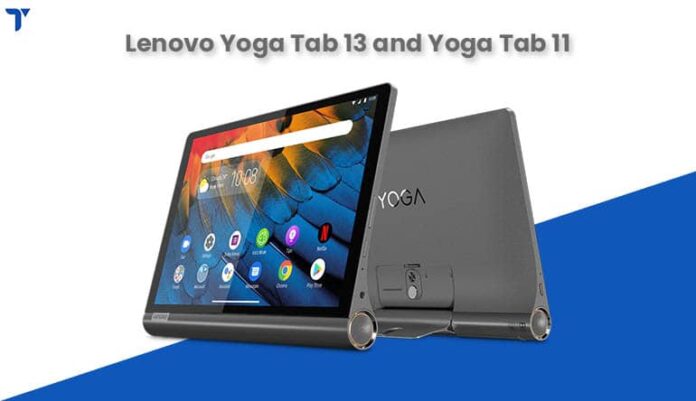 Lenovo has launched a series of android tablets including Lenovo Yoga Tab 13, Yoga Tab 11 and Tab P11 Plus. The company has announced that the new tablets will officially go on sale from July, in countries like Europe, Middle East, Africa and the US. You will get unique designs and build quality in the brand new tablets loaded with features.

Lenovo Yoga Tab 13 weighs 830 grams and is larger than the Yoga Tab 11 weighing 655 grams. Both have a slim and sleek body that comes with a stainless steel kickstand. A handle is attached to the kickstand for support and can also be used for hanging the device. The available color variations for Yoga Tab 13 and Tab 11 are Shadow Black for Storm Grey respectively.

The Yoga Tab 13 sports a 13 inches LTPS display with a 2160 x 1350 pixels’ resolution, while the Yoga Tab 11 features a 11 inches TDDI LCD panel with a resolution of 2000 x 1200 pixels’. Both displays have Dolby Vision support, a 60Hz refresh rate, and 400-nits peak brightness. There is Stylus support which can be useful for digital artists.

Qualcomm Snapdragon 870 SoC powers the Lenovo Yoga Tab 13, which is based on an Octa-core processor. On the other hand, the Yoga Tab 11 is powered by an Octa-core MediaTek Helio G90T SoC paired with Mali-G76 MC4 GPU. Both runs on Android 11.

The Yoga Tab 13 comes with a memory configuration of 8GB LPDDR5 RAM and options for 120GB or 256GB internal storage. Likewise, there are two memory variants of 4GB + 128GB and 8GB + 256GB in-built memory.

Rest of the Specs

The Lenovo Yoga tablets offer a quad speaker setup powered by JBL. Other highlights are Lenovo Premium Audio Solution, Dolby Atmos and three microphones. But there are only two microphones in Yoga Tab 11. The camera system features an 8MP rear camera with Auto Focus and an 8MP front lens with TOF 3D sensor for biometric.

Yoga Tab 13 also has Wi-Fi 6 support. Other connectivity options on the Lenovo Yoga Tablets include USB Type-C and Wi-Fi 802.11 ac. Sensors on the tablet include ambient light sensor and accelerometer.