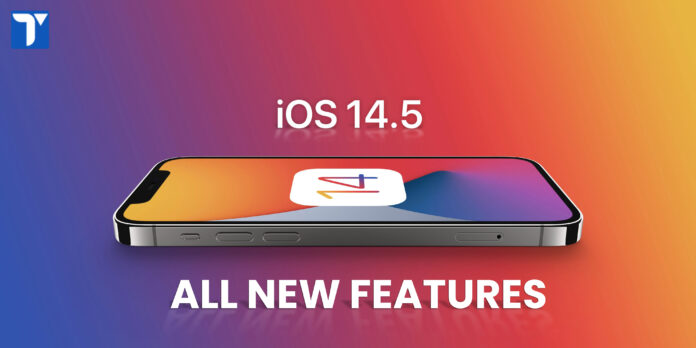 iOS 14.5 is a big update on iOS 14, accessible to general users after a couple of months of beta test. It is a major release for iPhone users with many impressive upgrades and several new features added. The latest iOS 14.5 is available for download since April 26, 2021.

How to update your iPhone with iOS 14.5?

You can update your iPhone or iPad in the Settings app by choosing Software Update in General section. Your device will connect to Apple’s servers and downloads and installs the update after a reboot. Following are the necessary steps to install iOS 14.5:

iOS 14.5 is compatible with all the iPhone devices that run iOS 14. This includes all devices from the iPhone 6S to the flagship iPhone 12 and the iPhone SE and the iPod Touch.

Apple Watch Unlock as an Alternative

Phone unlock with Face ID couldn’t get much implication in recent years due to face mask use during Covid 19. As a new solution, Apple has implemented an alternative way to unlock the phone using Apple Watch.

It allows users to unlock their iPhone with your Apple Watch without taking off a face mask or scanning face ID. You can enable this feature by choosing the new “Unlock with Apple Watch” toggle in the Settings app.

In this feature, Apple has rolled out its new users’ privacy policies in which applications like Facebook need to ask users permission before tracking them across other apps and services. With the release of iOS 14.5, app developers are prone to implement this new policy before their apps are removed from the App Store.

You can manage which apps can and can’t track your phone usage in the “Privacy” section of the Settings app. You will also see a list of applications that have requested permission to track you and make changes as per your preference.

Similar to the Waze mapping app, Apple Maps will now have a crowdsourcing feature to check and report possible road accidents, speed traps, and other traffic hazards. You can even report such issues using the report option in the Map app.

The feature is available in both iPhone and CarPlay with Siri Voice reporting so that user should not be taking their eyes off the road. Crowdsourced information collected from Apple Maps users will then be used to provide an earlier alert upon possible accidents and hazards.

Since there is no particular setting for iOS users to set default music player on their iPhone, a new feature is added as Siri Intelligence. It enables the virtual assistant to remember and adapt to your preferring music application.

When you ask Siri to play a song without specifying an app, it suggests you with a list of available apps out of which you can choose your preferred one. Over time, Siri may learn your preference and set it as your default music player. This is applicable for music services like Spotify, Pandora, and Amazon Music.

Starting with iOS 14.5, Siri will no longer have a female voice as the default, with an option for two additional voice in the American English section of its settings. Apple states that the purpose of these additions is to promote diversity and give users more privilege to pick a voice that sounds familiar to them.

You can find the new Siri voices in the Settings app, choosing Siri and Search section, where you will now have four options under American English, with options 2 and 3 being the new choices.

Find My app with the new update will be able to track the location of various belongings fitted with your new Apple device. iPhone 11 and 12 users can use the Precision Finding feature that works with the Ultra Wideband sensor in those phones to find any missing item more precisely.

It allows you to locate their PowerBeats Pro headphones using Apple’s Find My app, that can connect with several other Apple devices, including the iPhone, MacBooks, Apple Watch and AirPods. For security, you’ll get a warning on your iPhone if an unrecognized AirTag tries to track your location through your device.

iOS 14.5 can make it easy to monitor the case of iPhone battery underperformance. It recalibrates the maximum battery capacity and peak performance capacity on the iPhone 11 models to address inaccurate estimates of battery health reporting that iPhone users have encountered.

It gives a more accurate display of the maximum capacity of your phone’s battery. In case of a drop in power, it’s usually a sign that you need to get your battery replaced.

iOS 14.5 introduces more than 200 new emoji characters for iPhone and iPad users, from the Emoji 13.1 specification certified back in 2020. It includes heart on fire, mending heart, exhaling face, face with spiral eyes, face in clouds. It also has different gender options for people with beards and additional couple emojis with new skin tone mixes. The Headphone emoji has been updated to look like the AirPods Max rather than a generic set of headphones, and the rock climbing emoji now includes a helmet.

This allows Apple Fitness+ subscribers to cast their workouts to a compatible AirPlay 2-enabled smart TV or set-top box. However, only workout can be displayed on a bigger screen with this feature but Apple watch metrics such as activity rings, workout time remaining, calories burned, set length, and burn bars are not displayed on the TV. You can view such details on the connected iPhone or iPad.

It introduces global support for 5G in Dual-SIM mode on the iPhone 12 series, which allows you to keep two separate lines of service on a single device. This feature will come in handy for people who prefer to keep their personal and work lines separate or during international travels.

T-Mobile users can enjoy direct connection to a 5G network with iOS 14.5 support for the company’s standalone 5G network. This eliminates the process of piggybacking on an LTE network for 5G connection, resulting in to better 5G range and lower latency for T-Mobile users with iPhone 12.

Sharing a single Apple Card with multiple people was not possible until now, but in iOS 14.5, you can use iCloud Family sharing to give other people access to your Apple Card. You can share full account access that enables the shared person to access your balances and spending history, or you can set limits on the card for purchases.

The new update supports PS5 and Xbox Series controllers that let you play games with your phone or tablet. If you have one PlayStation 5 DualSense or Xbox Series X|S controller, you’ll be able to pair it with your iPhone in iOS 14.5 and use it as the other pair. The iOS 14.5 controllers can also connect to the Apple TV with the tvOS 14.5 updates.

Apple Music has several minor updates that provide a much improved user experience. There are slide gesture and long pressing on the song for adding the piece in the ‘Now Playing’ queue and access ‘Play Last’ or ‘Show Album’ respectively.

There is also a new ‘Share Lyrics’ feature to share lyrics through Instagram stories or iMessage cards. The albums will have more detailed information from the recording label with an option to find more albums from the label.

The Podcasts app will have an updated interface that makes it easier to find, follow, and listen to new episodes. Podcasts Show Pages are redesigned to make it easier to start listening. Apple is also replacing the “Subscribe” language from the Podcasts app in iOS 14.5 with “Follow” options since Apple has started a paid Podcast service.

You can save and download episodes, automatically getting added to your Library for quick access. Download behaviour and notification settings can be customized on a show-by-show basis. You can easily discover new shows with Top Charts and popular categories in the Search list.

You can set Reminders by Due Date, Creation Date, Priority, or Title. Also, there is an option to print a Reminder list, a feature that Reminders users have demanded for some time. Apple has also fixed a bug that used to cause some Reminders created through Siri to be set for early morning hours.

Some new Shortcut actions have been added in iOS 14.5.  You can now take screenshots with action incorporated into various shortcuts. There is a new action for locking the orientation of the iPhone and switching between cellular data modes. There are options to select 5G, 5G Auto, and 4G network options, with the Voice & Data mode action.

Samsung’s Rollable And Sliding screens in 2021, What Can We Expect?

Two ISPs to offers In-Flight Internet Services in the sky of...