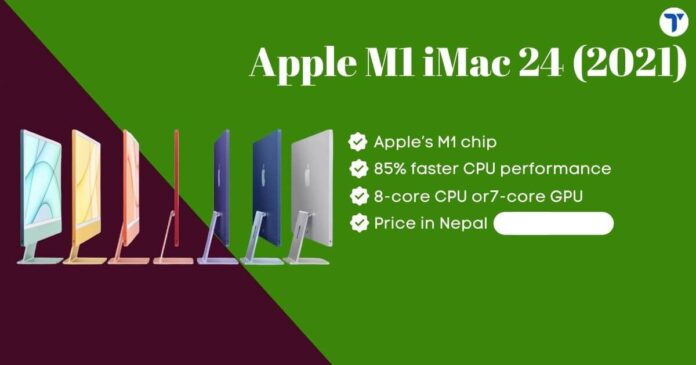 The computer comes with Apple’s ARM-based chip and has 8 CPU cores and 7 or 8 GPU cores. It has fun colors with a sleek design. In addition, the computer’s webcam is really good.

The computer is 11.5 mm thick with a 24-inches 4.5K Retina Display. It has a resolution of 4480 x 2520 pixels and 500 nits of maximum brightness. It also has True Tone technology to adjust the color temperature based on your surroundings automatically. Likewise, there is an industry-leading anti-reflective coating.

The webcam of the computer is 1080p. It has an advances Image Signal Processor (ISP) to greatly improve the image quality.

The processing power of the iMac comes from Apple’s M1 chip. The chip has allowed Apple to cut down the logic board and thermals, delivering a sleek performance.

The M1 chipset provides 85% faster CPU performance and up to 50% faster GPU performance than the most powerful discrete graphics of the fastest old 21.5-inches iMac. In some apps, you will notice the GPU twice as fast as in the previous generation of the small iMac model. It also provides 3x faster machine learning.

Apple M1 iMac 24 officially launched on 28th June 2021 in Nepal. The authorized resellers of Apple products in Nepal are EvoStore and Oliz Store.

Since the computer has been the biggest makeover since 2012, this new version is the best if you are looking to buy a new iMac.