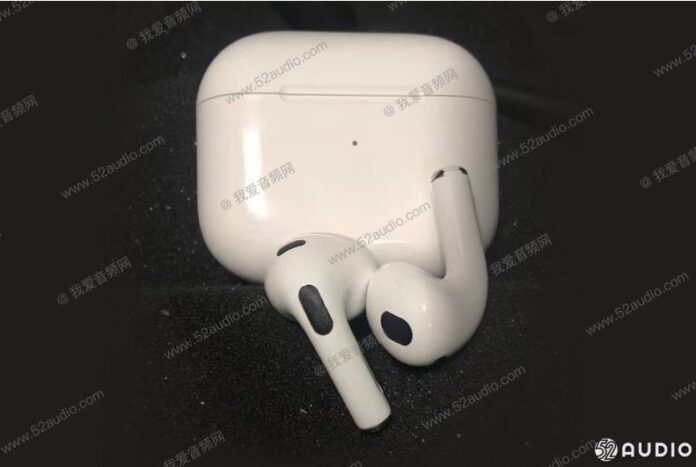 Apple launched its original Apple AirPods in 2016, which dominated the headphone market. It made an upgrade to it with Apple’s H1 chip in 2019. The second-generation AirPods were indeed an improvement coming from their predecessor. Again, came AirPods Pro in 2019.

With two years passing down, Apple has not released true wireless earbuds after the AirPods 2 (2019). But there are so many murmurs of the new updated model to arrive soon. We waited for it to release before 2020 ends; while the waiting game is still on, everything points to the release date to be around next month. But before it releases, let’s peek into the leaked images and specifications.

Chinese audio blog 52audio gives a live look at Apple Airpods 3. The top half of the earbuds look like the Airpods Pro but has a semi-in-ear design, while the carrying case is wider than the AirPods 2 one. It shows the earbuds to have a replaceable silicone ear tip. Other rumors say Airpods 3 to arrive with Spatial Audio that was on AirPods Pro and AirPods Max. They may also feature shorter stems with round edges but without active noise cancellation.

The 52audio report suggestion about the battery life is it would stay the same as the current second-generation AirPods, i.e., lasting around 5 hours. It is expected to support wireless charging.

Ming-Chi – TF International Securities research analyst, who has a good track record in Apple rumors, released a note in July 2020 claiming that the AirPods 3 would feature a similar system-in-package AirPods Pro, meaning the audio quality would be comparable.

We can also assume that the AirPods 3 would come with the same quick switching feature as AirPods and AirPods Pro.

Due to the COVID situation, many brands, including Apple, faced a delay in launch. Finally, rumors say Apple will probably launch the AirPods 3 in March. According to Ming-Chi, the third generation AirPods are likely to enter mass production in the first half of 2021. 52audio made the most recent claim about the third generation earbuds to launch in March 2021.

It will also launch some other products like AirPods Pro 2, HomePod smart speaker, along with AirPods 3. We may get the exact launch date in the following week, but for now, we can expect it to be anytime in March.

The Apple AirPods 3 have a probability of being cheaper than the AirPod Pro that costs $249. Some reports from China suggest its price to be $150, but we can’t guarantee it.