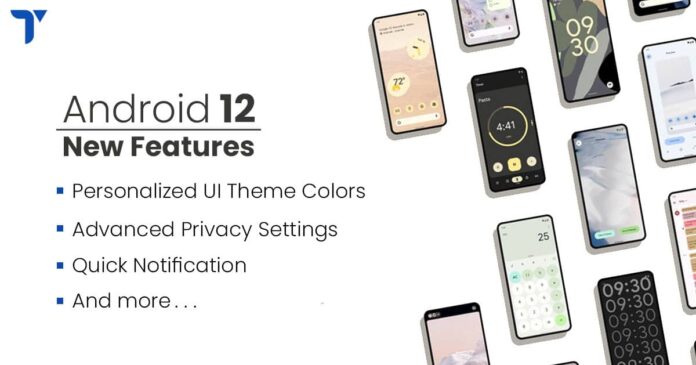 Android 12 is finally out with Google’s new design system called ‘Material You’. The latest update features more customizable color palettes, rounded buttons, quick notification, smooth animation and many other useful tools. It will be the most significant visual overhaul for the android system.

As Google announced in its I/O conference 2021, Android 12 provides users with more personalization choices on the device interface to make it look unique in their own way. You will find some changes on the lock screen with a huge centered clock and some new widgets on the home screen.

The beta version of Android 12 is already available to download for selective devices. Alongside Google Pixel, phone Oppo, Nokia, OnePlus, Xiaomi, ZTE, Asus, TCL and iQOO allow you to get first-hand experience of the beta version. If you have any compatible devices, you can sign up for the beta test, but it is not recommended until you have the data backup of the existing system and are completely ready to switch to the new platform.

The final version will take some time to reach the public, with Pixel 6 probably being the first device to feature it as default. Once it is officially released, you can install it on your phone by following the simple steps: System > Advanced > System update > Check for update

Google has implemented a color extraction protocol on Android 12, which automatically customizes the colors of the system UI according to your wallpaper. It picks the colors from any wallpaper you set on your phone and applies the same color theme to all the system UI, including notification bar, control sliders, buttons and lock screen.

This feature will make the whole system look unified and deliver an impressive user experience along with other new design elements like response motion and animation. The color extraction will also be soon available for Google web apps; however, it isn’t included in the first beta version of Android 12.

Android 12 offers more secured privacy settings that enable users to have better control over app permissions on how and when apps access their information. The Android’s private compute core ensures the apps following your privacy preferences. A new privacy dashboard gives you an overview of apps using the phone’s information such as location, camera, microphone and contacts.

In the privacy dashboard, you will find an option to manage the app permission for individual apps. The notification bar also has quick access to disable any feature in the phone that an app is using. In-built features like Live Caption, Now Playing and Smart Reply perform audio transcriptions within the device, avoiding sharing the data with external resources.

The notification service will provide more aesthetics with new transitions and animations as well as improvement on functionality and usability with features like responsiveness and app bounce. Android 12 will allow developers to channel “trampolines” to take users from notification tap to the app directly. Otherwise, the users get bounced first to notification and then to the app.

The quick tools panel will also feature noticeable changes especially in icon displays. When you pull down the notification bar, there will no more be round icons; instead the quick tools will be in rounded rectangles larger in size. The operational process will remain the same. With the increase in size, the quick tool icons will house more information but you will see fewer icons.

The existing Android version allows you to share a Wi-Fi connection via QR code. Nevertheless, in Android 12, you can use a dedicated feature, ‘Android’s Nearby Share’ to pass the Wi-Fi credentials to anyone nearby with an Android phone. This way you don’t need to scan the QR code from the host’s device.

Although QR code scanning is an easy and quick process to share Wi-Fi, the new share feature allows you to share the connection in a single tap. You can share Wi-Fi with multiple devices without requiring to scan the code from the other device manually.

This is another handy feature you will find in Android 12. You need to activate this mode from the Settings and then swipe downwards anywhere on the bottom of the screen to switch to one hand mode. This swipe gesture will lower the top half display towards the swiped direction.

Using the phone on one hand mode, you will easily reach any buttons or icons and access all features using only single hand, which can be helpful when your other hand isn’t accessible or holding onto something else.

In android 12, the Android Runtime (ART) will be included in Google’s Play system updates program. This enables the firm push key updates to ART and other important Android 12 services right through Google Play, avoiding the need for full system updates. It is also stated to push more module updates via Google’s Mainline in upcoming updates.

Google will allow developers can incorporate haptic feedback pattern with audio in Android 12. This boosts the strength and duration of vibrations adding more depth of immersive on media playback and system alerts. You can set custom ringtones for video calling apps to identify the caller via haptic feedback or simulate rough terrain in racing games.

Google is adding more widgets on Android 12, with more customization options. The Weather widget is the only one been confirmed so far, however, mockup of rumored widgets like Conversation widget have already been published. Developers have confirmed the functionality of the widgets which comes with limitation on compatibility with app other than Google suite.

This feature is particularly made for device storage management which keeps unused apps from occupying additional space. If you keep many rarely used apps on your phone and don’t want to uninstall it, app hibernation will help you free up the storage used by such apps. It restricts the app permission and clear its cache files from the device avoid it from taking up storage.

Other features on Android 12

Universal splash screen will add more cohesion to the app launching experience, by displaying background splash on every app even if it’s not integrated to the app by developers.

Rich content insertion provides users more control over rich media through the keyboard, clipboard or drag and drop, allowing users to insert any move media from one source to other.

Compatible media transcoding is another media compression feature which will allow transcoding HEVC video format in to AVC which is supported by more general apps.

Easy audio source selection makes the media player selection more customizable in your quick settings. You can turn on or off any app so that it won’t appear on the selection menu while playing an audio.

Screenshot markups will allow you to add text, emoji and stickers to your screenshot without using any additional tool.

Toggleable changes for debugging makes it easier for developers to debug their apps by making opt-in changes toggleable.