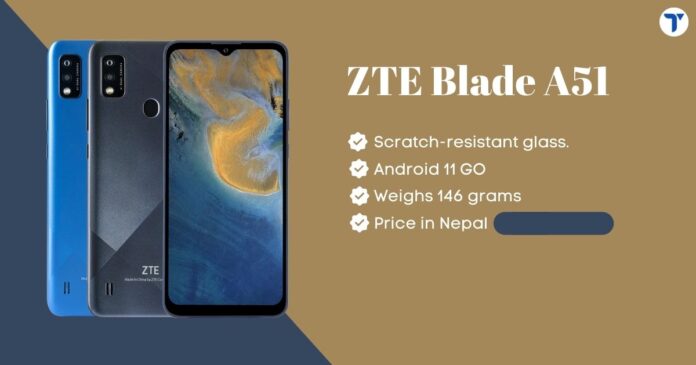 The smartphone has a decent dual camera, an average battery, and a processor. It is an entry-level smartphone with a proper display. Since the smartphone is a budget phone, it is good to carry the average daily task.

ZTE Blade A51 has polycarbonate materials on the back. It measures the physical dimension of 154.3 x 72.7 x 7.9 mm. Further, the smartphone has a 6.1-inches IPS LCD touch screen. Likewise, the screen has a resolution of 720 x 1520 pixels and an aspect ratio of 18:9. It also has scratch-resistant glass.

Bezels on display are thin on the side and slightly thick on the chin. The display has a dew-drop notch housing the front camera. On the rear, it has a dual-camera inside a rectangular module with curved corners.

ZTE Blade A51 weighs 146 grams and is available in three color variants: Black, Green, and Blue.

It has a rear-mounted fingerprint reader for biometrics. It also supports Face Unlock.

ZTE Blade A51 has a Spreadtrum UniSoC with a 28 nm manufacturing process. It is an octa-core CPU with four Cortex-A55 CPUs, clocking at 1.6 GHz, and four Cortex-A55 CPUs with a clocking speed of 1.2 GHz. Similarly, Realme C11 2021 also has the same chipset. For graphics handling, the smartphone employs PowerVR GE8322.

The smartphone has 2 GB of RAM and internal storage of 32 GB storage; the smartphone’s internal memory is expandable via a microSD card up to 128 GB.

ZTE Blade A51 flaunts a dual-camera setup on the rear. It consists of a 13 MP primary camera and a 2 MP camera. Some of the camera features are flash LED, Autofocus, Panorama, HDR, Touch focus, Face detection, White Color balance, Self-timer, etc.

The rear camera can capture the video in 1080p at 30 frames per second.

ZTE Blade A51 has a Li-Po 3200 mAh non-removable battery. It supports 5W charging. The smartphone has a micro USB 2.0 port for charging

ZTE Blade A51 Expected Price in Nepal and Availability

The expected price of ZTE Blade A51 in Nepal is NPR 17,500 for the 2/32 GB. Similarly, the official distributor of ZTE devices in Nepal is Evolution Enterprises Pvt. Ltd.

ZTE Blade A51 will soon arrive in Nepal. We will provide the details on the price and its availability once the phone comes to Nepal. Therefore, you can purchase the smartphone from the authorized retail store once the smartphone launches here in Nepal. Till then, stay in touch with our articles.

OPPO A31 with Triple Camera and Helio P35 Officially Launched in...