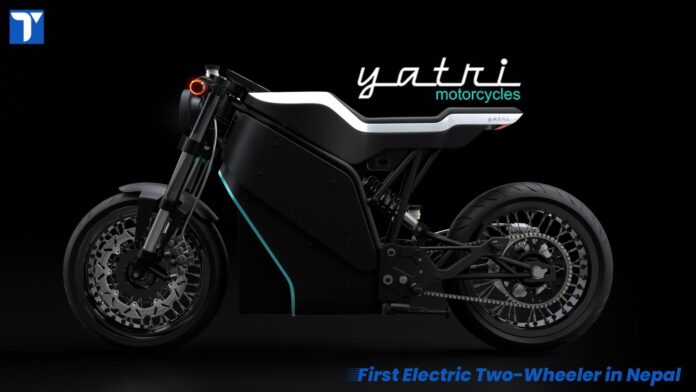 Yatri Motorcycles, an innovative motorbike company, has recently publicized their first electric motorcycle made in Nepal. A team of six engineers supervised by Ashim Pandey, founder of the company, worked on this project for two years. They revealed two of their latest products in a live showcase event: Project Zero and Project One.

The elegant electric two-wheelers are designed and built entirely in Nepal by the in-house team of Yatri Motorcycles. According to the company, carbon fiber materials were outsourced from other countries for cost efficiency, while the concept and production are domestic.

Both Project Zero (P-0) and Project One (P-1) feature a café racer design with a complementing touch of modern elements. The carbon-fiber body makes it a lightweight and comfortable vehicle. It is integrated with a 7-inch full HD display at the center of the handlebar, which displays the bike’s speed, time, and operating temperature and supports app connectivity. The company has also developed the Yatri Hub app to access the details of bike status.

Yatri’s electric motorcycles flaunt a modern and futuristic appearance, making them uniquely one of their kind. Both designed with minimalistic aesthetics, P-1 has a slightly different build structure than P-0.

P-1 has seemingly better-integrated battery placement and gives a more dual-sport design. It includes some additional features like a front LED light with DRL, and a rear LED light. It weighs 110Kg Kerb Weight which is comparatively lighter than P-0 with 190Kg Kerbweight.

An electric powertrain with high-performance stability powers P-0. The electric motor generates a max capacity of 64 HP (48kW) and a max torque of 120Nm at the shaft and 650 Nm at the wheel. Practically, it performs 0-60Kmh under 2.5 seconds. It carries an 8kWh battery with a 230 Km range capacity full of 2 hours.

P-1 is a considerably toned-down version of P-0, which is neither loud nor aggressive but still manages to deliver high performance at a low cost. The electric motor generates a max power of 19Hp (14kW) and a max torque of 480Nm at the wheel. It carries a 3kWh battery that fully charges in 6 hours.

Both are packed with impressive and smart features, while some are unavailable for P-1.

Project Zero will be a premium bike at a premium price with a price tag of NPR. 19,49,000. Project One will cost an affordable price of NPR. 4,95,000. P-O and P-1 are available for reservation on Yatri’s official website, paying a certain amount of refundable charge.