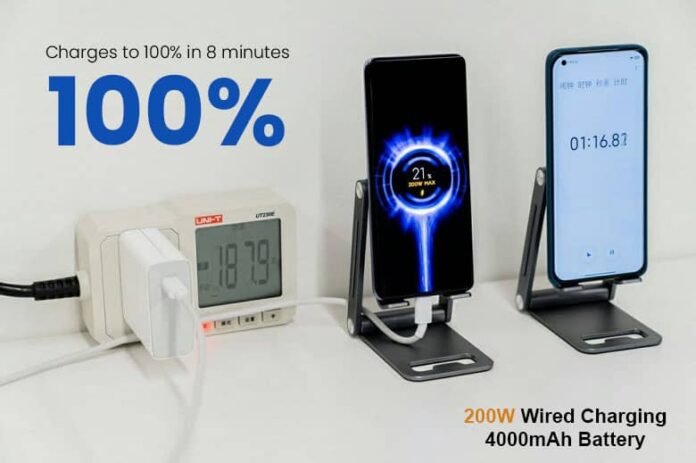 Fast charging technology has become a dominating trend among smartphones manufacturers. Top brands like OnePlus, Samsung and Xiaomi have been frequently using fast charging support as one of the major selling points of their phones. Several smartphones available in the market support fast charging in multiple forms, including wired, wireless, and reverse fast charging in some flagship devices.

Xiaomi has introduced their hypercharge technology that offers 200W Fast charging and can charge a 4000mAh battery from 0 – 100% in just 8 minutes. This record makes the hypercharge world’s fastest charging system, breaking the score of Oppo’s 125W Flash charger 2020, which could charge the same capacity battery in 20 minutes. Xiaomi also unveiled their 120W Wireless fast charging that can fill up a 4000mAh battery in 15 minutes.

The company presented a demo of its new wired and wireless hypercharge technology using two of its own smartphones. The 200W wired hypercharge was tested on Xiaomi Mi 11 Pro with a 4000mAh battery, which took 44 seconds to charge up to 10%, 3 minutes 23 seconds to 50% and fully charged in 7 minutes 57 seconds.

Xiaomi hypercharge demonstration was a promotion campaign of its smartphones. The test was conducted under the most favorable scenario customized for supporting the hypercharge. The company hasn’t confirmed the compatibility of its wired and wireless hyper-charging in devices of any other brands. Many smartphones we have been using in the current time aren’t yet fully compatible with hyper-fast charging.

Xiaomi’s hypercharge technology is way too advanced and futuristic for normal devices. The system still has to undergo various test scenarios to gain compatibility over every smartphone. The implementation of hypercharge also comes with several usage risks like device heating and battery life drainage. The manufacturer has a lot to cover before fully installing such a high-tech hypercharge system for normal usage.

Motorola Moto E7 Plus launched in Nepal with a 48MP dual...