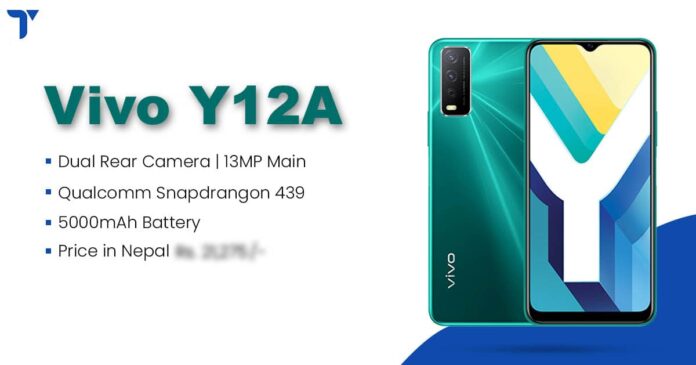 Vivo has unveiled Y12A as a new budget smartphone in Thailand and Singapore. The budget phone comes with compromised specs to maintain the low pricing. In this article, you will find more details about the specifications and features of Vivo Y12A, along with its expected price and availability in Nepal.

Vivo Y12A has a similar build quality to the Y12s 2021 recently launched in Vietnam. It offers a dual rear camera setup and the front camera has an 8MP selfie lens. The display is quite satisfying with an HD+ resolution. A Qualcomm chipset powers the device and has a 5000mAh battery backup.

The phone has a polycarbonate body with a sleek and stylish design. It has a 2.5D curve that gives a better grip while holding the phone. The back panel has a glossy finish and houses the rear camera module in an elongated arrangement. At the front, there is a water-drop notch and thin bezels around the screen.

It features a 6.52 inches IPS display panel with an HD+ resolution of 1600 x 700 pixels. The screen has a 20:9 aspect ratio. Vivo claims that the side mounted fingerprint scanner unlocks the phone in just 0.23 seconds. You can choose from two color variations, Phantom Black and Mint Green.

Vivo Y12A is powered by a Qualcomm Snapdragon 439 Silicon built on a 12nm FinFET process. It is based on an Octa-core processor that integrates 8x Cortex-A53 CPU cores clocked at 2.0GHz. The chipset is already two years old than other chipset used in currently released phones. However, you can perform normal tasks with no interference.

It is available in a single memory configuration of 3GB RAM and 32GB internal memory. The internal storage might fill up soon so you also get a memory expansion option using a microSD card. It runs on Android 11 with Funtouch OS on top.

The rear dual camera system includes a 13MP primary camera with an f/2.2 aperture, accompanied by a 2MP depth sensor for portrait shots. The rear main camera is AI powered for a better quality capture.

The water-drop notch at the front houses an 8MP camera for selfie and video calls. It can be also used for face unlock.

Vivo Y12A has been officially launched in Thailand and Singapore at the price of THB 4,499. The phone might soon launch in Nepal with the estimated price of NPR. 17,500.

Huawei Launched another Smartphone in its 8 Series as Huawei nova...

Vertu iVertu 5G – A Luxury Smartphone, is now Available in...