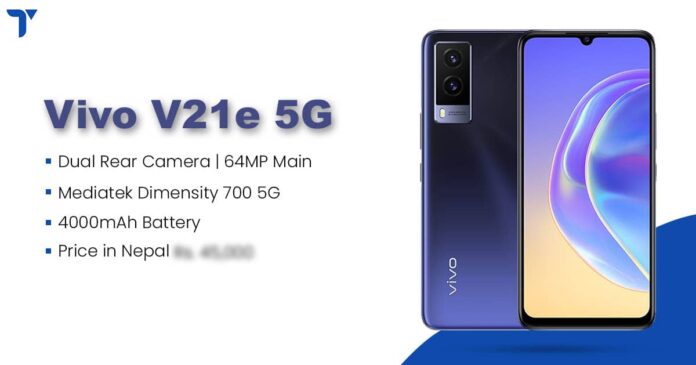 Vivo has added a new edition smartphone to the V21 lineup. The Vivo V21e 5G has finally become official in India. There are few similarities and some distinguishing changes in the 5G variant than the 4G version. This article will further discuss the specs and features of the Vivo V21e 5G and its price and availability in Nepal.

Vivo V21e 5G comes with a dual rear camera setup and a 32MP front camera. It features a similar display as the Vivo V21e, but the screen has some downgrades. A MediaTek chipset powers the V21e 5G, whereas a 4000mAh battery fuels the device.

The company has titled the phone the ‘Most Stylish 5G’. However, it retains many design aspects from its predecessor. The front looks similar to the Vivo V21e and has a water-drop notch. At the back, the rear camera bump houses two camera lenses instead of three. It has a 161.2 x 74.4 x 7.4 mm body dimension and weighs 171 grams. You can choose from two color variations – Sunset Jazz and Dark Pearl.

Vivo V21e 5G features a 6.44 inches’ AMOLED panel with a screen resolution of 1080 x 2400 pixels. The screen has 408-ppi pixel density but lacks the HDR support and higher refresh rate. Its screen-to-body ratio is 83.5% and has an aspect ratio of 20:9. For biometrics, an under-display finger print scanner is available.

It is available in a single memory configuration of 8GB RAM and 128GB internal storage. The system supports an additional 3GB RAM extension. Thus, you can run highly loaded apps and store as much data as you want with no memory shortage. It operates on Android with Funtouch OS 11.1.

The front camera has a 32MP selfie shooter which is a downgrade from the 44MP camera. It supports Optical Image Stabilization and video recording at 4K@30fps and 1080p@30fps. Other camera features include LED flash, HDR, panorama.

The phone has a 4000mAh battery with Flash charging technology. It supports 44W Flash charge.