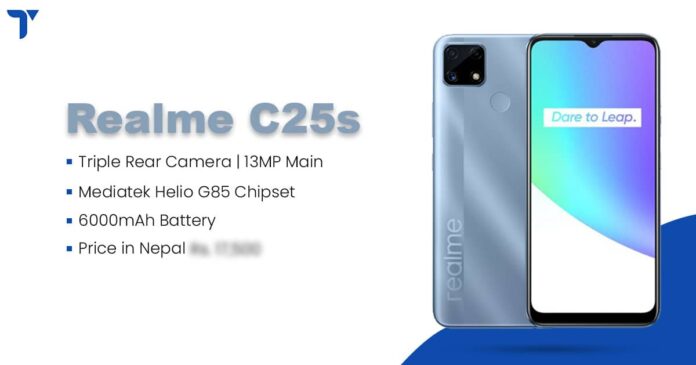 Realme has launched a new budget smartphone, Realme C25s. It is the rebranded version of Realme C25 with an upgrade of the specs. The phone comes with a slightly toned processing unit. In this article, we will find out further details on Realme C25 specifications and features along with its price and availability in Nepal.

Realme C25s offers a triple camera setup at the rear and an 8MP front camera. The front screen has a wide aspect ratio and also the back has a stylish finish. It is powered by a Mediatek chipset and backed up by a massive 6000mAh battery. There are two options for internal memory configuration.

The phone has a familiar design with the other models in the Realme C series. At the front, it has a water-drop notch for the camera and a square camera bump placed at the back. The back panel has the proprietary stripe with Realme branding. It has a body dimension of 164.5 x 75.9 x 9.6 mm weighing 209 grams.

Realme C25s features a 6.5-inches IPS LCD panel with a resolution of 1600 x 720 pixels. It has an aspect ratio of 20:9 and a screen-to-body ratio is 88.7%. The screen supports a peak brightness of 570 nits. The fingerprint scanner is rear mounted. There are two color variations available – Aqua Blue and Aqua Grey.

It is available in single memory variant of 4GB RAM while you can choose from 64GB or 128GB internal storage. The device software is based on Android 11 with Realme UI 2.0 on top. Features like App Quick Freeze and Screen Optimization enhance the user experience.

The triple rear camera comprises a 13MP primary camera with an f/1.8 aperture sustained by a 2MP monochrome lens with an f/2.4 and a 2MP depth sensor with an f/2.4. The Malaysian version of Realme C25s has a 40MP main camera.

The front camera features an 8MP lens with an aperture of f/2.0 for selfie and video chat, with a water-drop notch housing. It is an average camera setup but it gives satisfying picture quality.