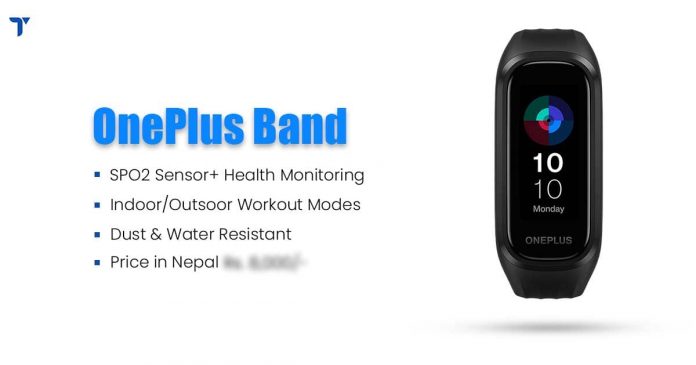 OnePlus had launched its first fitness wearable OnePlus Band in the beginning of the year. The company has officially released the OnePlus band in Nepal, good news for the fitness and health enthusiast. The fitness band has been able to bring much hype in Nepalese market also due to its reasonable price. So, let us have a look at what the band has to offer.

The OnePlus band is designed to counter Xiaomi’s MI Smart Band and shares a similar feature to it. The fitness and comes with an AMOLED display and a new interesting feature SpO2 for Oxygen saturation level which has become a major attraction among people. The OnePlus band works with the OnePlus health app, which lets you track your activities, heart rate, and sleep data.

In terms of design, OnePlus band comes with a detachable tracker that can be attached with the various range of wrist straps provided. Also, the users can apply preferred clock faces to the band as well as personalize the band with their own pictures. The fitness band features a 1.1 inch AMOLED display weighing about only 22.6 g which feels very light to the user. It also has IP68 certification and a 5ATM water-resistant rating. It can also resist dust to some extent.

OnePlus Band keeps track of your sleep cycle, which helps you to analyze your sleeping pattern using its in-built sensors. Combining with this sensor, the band also has a SpO2 sensor that measures the oxygen level unlike in Mi Band 5. The SpO2 sensor provides a comprehensive view of your health through the OnePlus health app. It comes with an array of sensors like a blood oxygen sensor, a three-axis accelerometer, gyroscope, and an optical heart-rate sensor. With 13 exercise modes preloaded in the band, the user can use any mode feasible to them; Outdoor Run, Indoor Run, Fat Burn Run, Outdoor Walk, Outdoor cycling, Indoor cycling, Elliptical trainer, Rowing machine, Cricket, Badminton, Pool Swimming, Yoga and Training.

The other interesting feature of the band is, it tracks your heart rate 24 hours in a certain interval, using a heart rate sensor. The band will notify you in case, you have irregular heart readings. Though it has such a great feature, it still lacks in the stress alert feature as in Mi Band 5.

Coming down to the battery, the band offers a 100mAh of battery that does not die up to 14 days of usage on a single charge. I think the huge disappointment in the band will be its charger. The OnePlus Band does not provide a magnetic charger like on Mi Band 5. In order to charge the OnePlus band, one has to detach the tracker from the strap.

OnePlus band was launched in India with the price tag of INR 2,499. While in Nepal, the starting price of the fitness band is NPR. 6,490 making it slightly overpriced. You can purchase OnePlus band from the authorized stores. It is also available to order online.

Honor Band 6: The King Of Budget SmartBand, Launched in Nepal