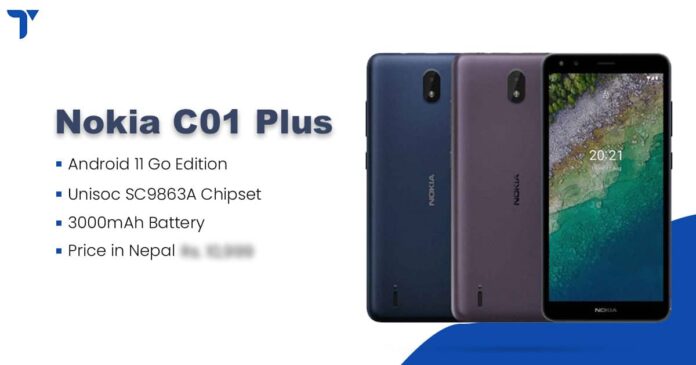 Nokia C01 Plus is the latest release of the company, recently launched in Russia. It is a new addition to the Nokia C lineup, which offers budget-range phones packed with mid-level specifications. The new Nokia C01 Plus has gone official in Russia and available for pre-order. In this article, we will discuss its features and specs with the expected price and availability.

Nokia C01 Plus is a budget offering a smartphone that comes with a highly compromised specs sheet. The design and build quality of the device is mediocre. It features an average size display and has a simple body. The performance and memory are low as expected from a budget phone. Still, the overall functionality that the phone offers makes it a good beginner choice considering the given price tag.

The phone has a similar look to the Nokia C1 Plus but the back has a textured layer. There are thick bezels around the front with Nokia branding at the bottom chin. It has a body dimension of 148 x 71.8 x 9.3mm and weighs 157 gm.

Nokia C01 Plus features a 5.45-inches LCD panel with a screen resolution of 720 x 1400 pixels. The screen has an aspect ratio of 18:9. The placement of the front flash and speaker is different. It is available in two color variations – Blue and Purple.

It is powered by Unisoc SC9863A SoC chipset based on an Octa-core processor. The processor has four Cortex-A55 cores clocked at 1.6GHz and four others clocked at 1.2GHz. This system configuration is designed for normal performance and cannot handle heavy tasks like gaming with high graphics. In contrast with the processing unit, it runs on Android 11 Go Edition.

There is only a single memory option available with 1GB RAM and 16GB internal storage. Although, it has memory expansion that allows extending the storage capacity up to 128GB. You can store a large amount of data in your phone with the space extension but the RAM isn’t compatible with large apps.

The camera system consists of a single camera on both sides. The front has a 5MP lens with an LED flash and the rear also features the same camera setup.

Nokia C01 has a battery backup of a 3000mAH cell. The battery is replaceable due to the removable back panel. There is no Fast charging support.

Nokia C01 Plus price in Nepal and Availability

The starting price Nokia C01 Plus in Russia is RUB 6,490. There is also chance of it release in Nepal at the estimated price of NPR. 11,500.