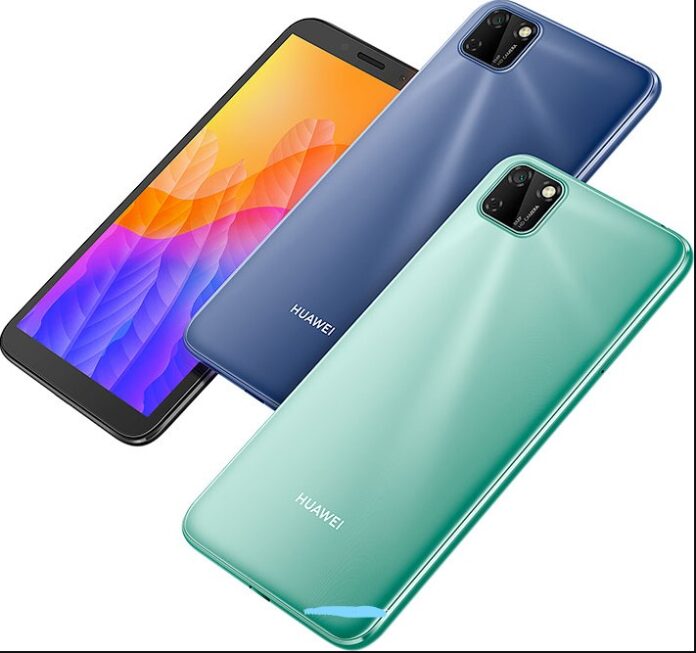 The low budget phone Huawei Y5p was launched on 5th May 2020. It is the cheapest of the Y series. The Huawei Y5p is available in Nepal at the price of NPR 10,090. It was launched in October 2020 in Nepal. The cheap segment phone has some impressive features. Let’s find out what Huawei Y5p has packed inside the phone.

The smartphone with a traditional design gives a moderate performance and has an ample battery capacity. Huawei Y5p is a budget phone with a stylish display and an average camera setup. However, it lacks fast charging and fingerprint sensors. But expecting more by spending less is something you should avoid.

Huawei Y5p flaunts a 5.45 inches TFT LCD (IPS) with a resolution of 720 x 1440 pixels and 295 PPI pixel density. It has an aspect ratio of 18:9. The phone weighs 144 grams. Likewise, the smartphone has three refreshing color variants: Mint Green, Midnight Black, and Phantom Blue.

On the top of the phone is a 3.5mm headphone jack, while the bottom has a micro USB port and a mic. Similarly, the phone’s left side has a SIM card tray, whereas the right side has a volume rocker and a power button. The rear camera is inside the square-shaped module along with the LED flash. On the other hand, the selfie camera is at the display’s top right.

It also has a face unlock feature, rare in the budget phone. AI face recognition has excellent speed and convenience. The advanced algorithm and accurate face mapping are impressive.

The processor gives smooth navigations through the apps, but multitasking can create a lag. Similarly, while surfing the internet, you may have to wait for the pictures to load completely, and also, the scrolling is a little slow.

The phone is based on Android 10 OS and runs EMUI 10.1. And as it is facing a ban from Google Services, the Huawei App Gallery is available instead of Google Play Store. It is the third biggest App Store but has limited apps.

Connectivity features like Wi-Fi, Bluetooth, GPS, are available while the sensors are accelerometer, gyroscope, and compass.

On the rear, Huawei Y5p has a single camera setup, an 8MP primary camera with an aperture of f/2.0.

The rear camera images are decent, clear, and correctly saturated with no overexposure. However, the camera works fine only under enough light. Meanwhile, there is also HDR mode and automatic embellishment function.

The selfie camera on the front is a 5MP camera with an f/2.2 aperture. It has a screen flash.

The picture’s quality from the front camera is average, but the noise is seen when you zoom the pictures. Also, the low light images are inferior.

Videos of up to 1080p at 30fps are recordable from both cameras.

The videos’ quality is also OK only under decent light with average stabilization, while the low light videos produce noise.

The phone packs a 3,020 mAh Li-ion battery supporting the 5V/ 1A charging. It keeps 17 hours of video playback and has an intelligent energy-saving feature to improve battery consumption efficiency. A day without charging should go easy without heavy performance. Finally, the phone takes about 2 hours and 30 minutes to get fully charged.

The low budget smartphone Huawei Y5p costs NPR 10,090 in Nepal. Call Mobility is the official distributor of the Huawei smartphone in Nepal. Likewise, you can get the phone from offline stores or even some online stores. The phone is good to go for an average user; however, make sure if the app you have to use daily is available in the App Gallery or not.