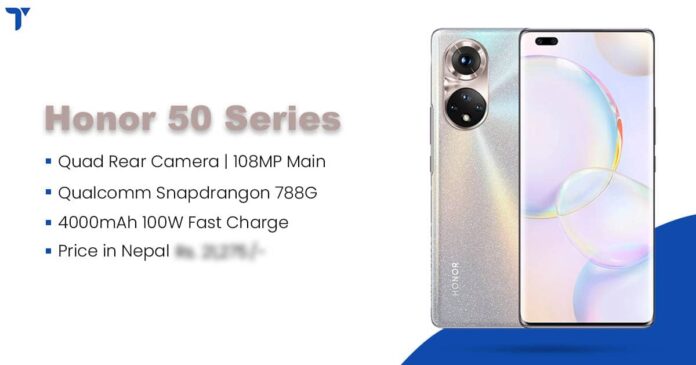 Honor, the former subsidiary company of Huawei, will be launching its first flagship smartphone series on June 16. The Honor series will include three models – Honor 50 5G, 50 Pro and 50 SE. 91Mobiles has revealed the complete specs sheets of the upcoming Honor 50 series. Honor 50 and 50 Pro models will share almost the same specs with minor differences while the SE version will be an entry-level phone.

The vanilla and pro version of Honor 50 are very identical in design while slight differences exist in the display and camera section. The latter has a larger display and a dual front camera setup. A Qualcomm chipset will power both devices. The battery backup department will also be durable with high speed fast charging on both.

Honor 50 5G will flaunt 6.57 inches OLED display with an FHD+ resolution, whereas the 50 pro has 6.72 inches AMOLED display. The screen has 120Hz dynamic refresh rate and 300Hz touch sampling rate. At the front, Honor 50 has a punch hole cut-out for camera placement. The pro version has a pill shaped cut-out.

Both versions will be powered by Qualcomm Snapdragon 778G chipset. Now that Honor is no longer a part of Huawei, it has confirmed to include Google Mobile Service (GMS) in its devices for the global market.

The memory configuration is rumored to have 8GB RAM and 128GB internal storage. The phones will run on Magic UI 4.2 based on Android 11.

The quad camera system has a two tier setup with two circular rings protrude on top of a pill-shaped base. It comprises a 108MP primary camera accompanied by an 8MP ultra-wide camera with an aperture of f/2.2 and a 2MP macro sensor.

The front camera will have a 32MP camera shooter. There is a secondary camera of 12MP for Pro model.

Honor 50 SE is an entry level flagship phone that offers some down toned features in both design and performance aspects. There will be a triple rear camera setup and a 16MP front camera. The processing unit will integrate Mediatek chipset. The battery system is the same as other models. Nonetheless, it is a high performance device.

The SE version has a similar build quality to other variants with some specs excluded. The camera module has a triple lens setup. It has a body dimension of 164.73 x 75.63 x 8 mm and weighs 191 grams.

The phone features a 6.78 inches LCD panel with an FHD+ resolution. The front has a punch hole cut-out for camera housing.

It will be powered by a Mediatek Dimensity 900 SoC chipset. The memory configuration is rumored to have 8GB RAM and 128GB internal storage. The phones will run on Magic UI 4.2 based on Android 11.

The triple rear camera will have a 100MP primary camera with an aperture of f/1.9 sustained by an 8MP ultra-wide sensor and a 2MP macro sensor with an f/2.4.

The front has a 16MP camera for selfie and video call.

In reference with the international pricing, we can estimate the price of Honor 50 series in Nepal to fall under the range of NPR 50,000 – 75,000.

Redmi 9 Power- Another Addition to the 9 series, launched in...