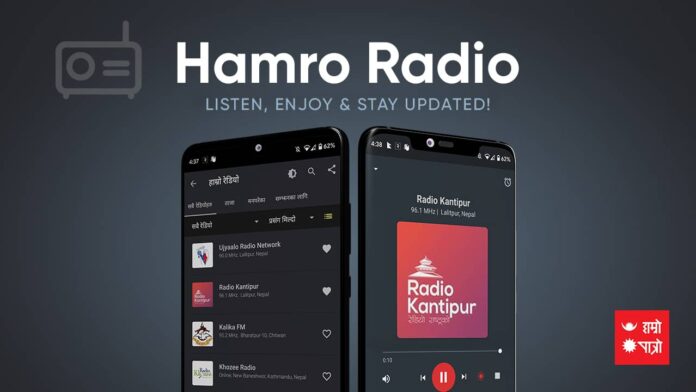 Hamro Patro is one of Nepal’s most popular app that has a large user base. The app has updated its most commonly used Radio feature. There are more than 500 FM channels that users can tune in via Hamro Patro app. Now the FM stations will be broadcasted with High Definition audio quality. This improvement in streaming quality will surely enhance the user experience, especially for regular listeners.

Previously, the Radio feature in Hamro Patro was available in 32 bits and 64 bits which still didn’t have clear audio quality. Now that the broadcast quality has improved, users can listen to the Radio in HD @128 kbps. Users can tune in to over 500 FM stations from all around the world; all they need is the Hamro Patro app and an internet connection.

Ms. Sunidha Gautam, the MD of Hamro Patro, stated that they’ve had updated 38 stations so far, including Image FM, Ujjyalo Radio Network, Vijaya FM, Nepal Radio Network, BBC, Classic FM, and others. There would be 100 more channels getting the update in the coming future.

She also mentioned that during the app’s initial release back in 2013, the overall infrastructures for internet connection in Nepal were not as good as now. However, now the broadband connection has significantly progressed to support features like HD Radio.

Hamro Patro Milestones and Other Features

Other than Radio, there are multiple features Hamro Patro offers to its users. Allowing users to listen to their favorite radio stations anytime and from anywhere in the world has renovated the notion of radio streaming. Daily news update is another key feature, alongside calendar, national events, horoscope, newspaper, share market and so on.

You can download the full version of Hamro Patro app for free and use it even without logging in.

How To Get International Payment Dollar Prepaid Card in Nepal?