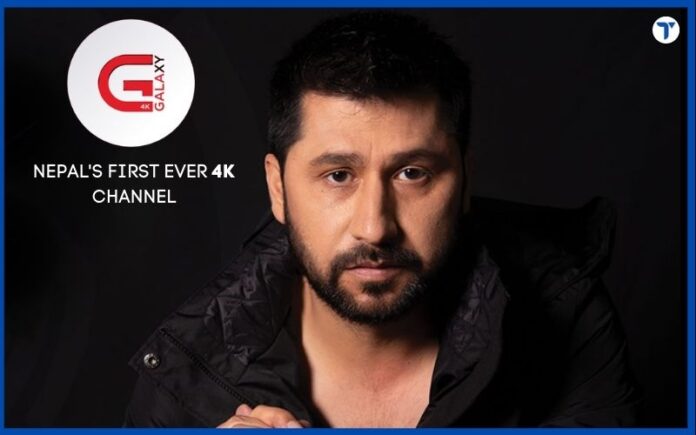 Eminent journalist – Rabi Lamichhane, who holds a Guinness World Record as the Longest Television Talk Show, has announced a new TV channel, Galaxy 4K. He announced it as the first 4K resolution channel in Nepal through a special launch event held at Marriott Hotel in Kathmandu on Tuesday. Mr. Lamichhane is the Managing Director for the television and will host three different programs as well.

Galaxy 4K TV has drawn a new line in terms of the resolution of the channel in Nepal.  Many channels in Nepal still run in SD resolution, while few have upgraded to HD. The step from the team is appreciable, and people are looking forward to it. Many programs that will run on the channel like Sidha Kura, Crime Patrol, Sa Re Ga Ma Pa Li’l Champs, Aawiskar, Ko Bancha Crorepati, and others were unveiled.

4K is one kind of resolution standard that has 1340 x 2160 pixels. It is also called Ultra High Definition or UHD, and today a large number of monitors come with this resolution on the screen. 4K resolution is used in both recordings as well as streaming. You may have noticed the resolution on YouTube as well.

There are small units known as pixels; you will see if you stand very close to your screen on display. In 4K, there are 3840 horizontal pixels, while the vertical pixels are 2160. Due to around four thousand horizontal pixels, it is called 4K.

What is the difference between SD, HD, and 4K?

Full HD resolution (1920 x 1080) – when its height and width are increased by twice, you get 4K resolution. Higher resolution means your content quality looks sharp and will remain evergreen in years to come

If you have 4K television, but the content is not 4K, you do not get the best broadcasting. For this, you can record the 4K content on your mobile devices and watch it on TV. But for the recording, you should at least have a 12 MP camera.

Should I upgrade to a 4K TV to watch the 4K Channel?

You do not necessarily need to buy a new TV to watch 4K Channel. If your TV does not support 4K, you can still view the channel in HD resolution. However, if you want to enjoy the 4K content, you can upgrade to 4K TV. But before buying, you may do proper research on the contents you would watch through 4K TV. As upgrading TV for just one single channel would not be thrifty.

Spotify Launches in Nepal and Other New Markets Across Asia, Africa,...