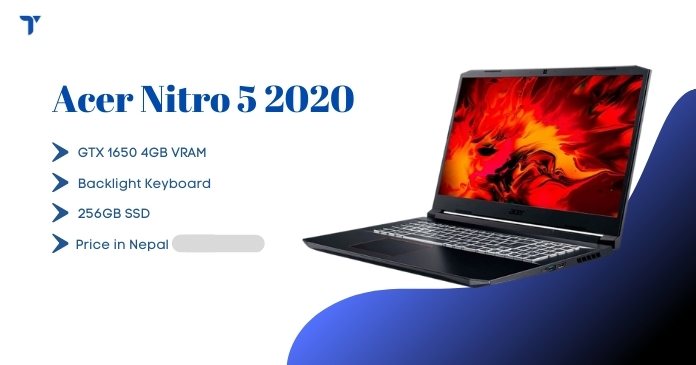 Acer’s Nitro 5 is a gaming laptop that focuses completely on gamers. This laptop comes with a 144Hz 15.6” Full HD IPS screen, 256 GB of fast SSD storage, 8GB of RAM, and an Nvidia GTX 1650Ti graphics card. Generally, it has a screen designed of plastic which normally attracts fingerprints. The laptop is used for other purposes like editing videos and photos, which is also considered a great option due to its higher-end spec and its affordable price.

Acer Nitro 5 is targeted towards gamers which is an entry-level 15-inch which is, in fact, cheaper along with its best specifications. As the laptop has got an RTX 2060, it consists of a good gaming set with its cost around NPR 1,20,000.

Both AMD and Intel Options are offered with an Acer Nitro 5.

Acer Nitro 5 has a Full HD 1920 x 1080 IPS screen, not a touch screen. The panel consists of decent viewing angles and is fairly sharp. One of the advantages of gaming is that it has a 144Hz refresh rate.

Acer has also added a touch of red and black accents. The trackpad is positioned to the left side, which measures 106mm x78mm with red trim. The trackpad is also a plastic surface that supports precision drivers. The keyboard is of over 1.5mm travel. Including feet, Acer Nitro 5 is 363mm wide, 28mm thick, and 255mm deep.

The cooling system in this laptop can be controlled via the Acer nitro sense app as this nitro 5 consists of two fans, particularly for CPU and GPU. On top of that, this laptop has a cool boost setting which increases the maximum rpm. This setting forces the fans to run at 100.

Acer claims that the battery power can last up to 10 hours as it comes with a 77.48-watt.

Acer Nitro 5 consists of a best-performing laptop processor with Intel Core i5 9300H processor. The base clock speed of the CPU is 2.50GHz.

It has exceptional features, i.e., without opening up the machine, the USB Type-C port supports fast external drives. It is not just for fast loading storage of additional games but also as a separate media drive fast enough to use video editing. USB-C port supports charging up to 5V at 3A or 15W.

The main feature of the Acer Nitro 5 is that its affordability. Looking at its all-over specification and all the powerful gaming hardware, it’s quite cheaper. Acer Nitro 5 2020 containing GTX 1650 graphics card and Core i5-9300H costs NPR 1,20,000 in Nepal.