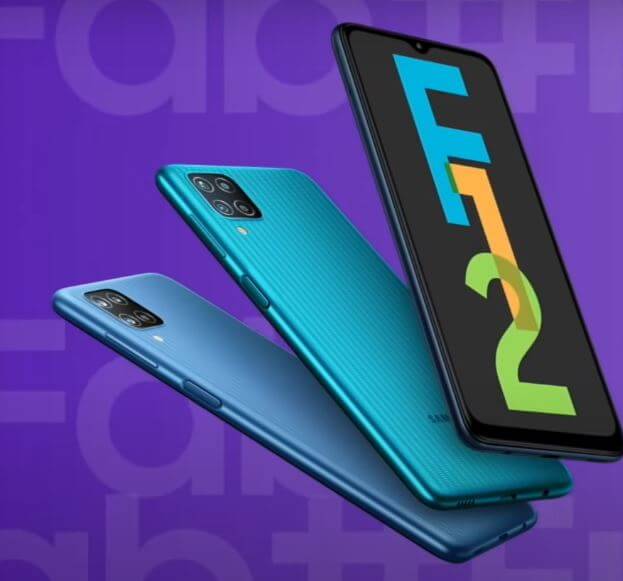 Samsung Galaxy F12 has a 6.5-inches HD+ Infinity-V display; it is a 90Hz display. The smartphone flaunts an aspect ratio of 20:9 and a resolution of 720p. A selfie camera sits in a teardrop notch at the top centre of the display.

A quad-camera setup lies on the square module on the back; LED flash lies below the camera module. The rear has a vertical stripe-like texture. Similarly, it has three color variants: Sea Green, Celestial Black, and Sky Blue. The smartphone weighs 221 grams.

Samsung Galaxy F12 has a side-mounted fingerprint reader and face unlock for authentication.

Samsung Galaxy F12 comes with the Exynos 850 processor– a Samsung’s in-house processor. It is built on an 8 nm fabrication process. Likewise, it employs the Mali-G52 GPU to look after the graphics of the smartphone. The octa-core processor clocks up to the speed of 2.0 GHz.

It has 4 GB RAM that combines with either 128 GB or 64 GB internal storage. The RAM type is LPDDR4X. Similarly, the inbuilt storage is expandable up to 1TB via a microSD card.

An 8 MP selfie camera is present on the front. It also supports video recording in 1080p at 30fps, just like the rear camera.

A full charge can keep you all day long.

The authorized distributors of Samsung devices in Nepal are – Integrated Mobility Solutions Pvt. Ltd., and Him Electronics Pvt. Ltd. You can get the smartphone from any offline stores or online stores once it gets launched in Nepal.